We had to wake up at 5 o’clock in the morning because our school was far away. Sometimes we had to go to school late, because we had to wait for the bathroom. But since it wasn’t our house, they could use the bathroom first. But at school, we would get truant. I could not go to recess because of this. — Quote from 12-year-old girl experiencing homelessness, in The State of America’s Children 2014 from Children’s Defense Fund.

Impoverished children are climbing mountains before they can walk. From lack of housing to hunger and violence, poverty places adult demands on child-sized shoulders.

Stability is crucial to the health and well being of a child. But in this post, Part One of our series on homelessness in the classroom, we’ll see how poverty and homelessness create an unstable world for children.

The bad news is that this instability can have lasting consequences for children. The good news is that there are many committed adults working to improving the lives of these children. However, before we get to solutions (coming at the end of this series), let’s talk about the many ways in which poverty hurts children. Understanding the problem creates a framework for answers.

However, they may find themselves in dilapidated housing that poses significant health risks.

From the story of the girl at the beginning of this post:

We laid on blankets. It felt hard. There were little roaches that walked over us at night.

One little one got in my ear, and it was hard to take it out. It was nasty, because I could hear it scratching. It hurt a lot when I was trying to sleep. . .

Rife with lead, mold and infestations, housing for impoverished families can lead to significant health problems in children. Lead exposure especially is harmful to children, and if significant, can cause lead toxicity. This toxicity leads to permanent neurobiological changes, reduced IQ, and other health effects, according to groups like the National Health Care for the Homeless Council.

For parents relieved to find housing, I would imagine that watching the roof over your head cause physical illness in your child is like watching a dream turn into a nightmare.

Unfortunately, lack of or unhealthy housing is just one problem in what can be an ever-expanding web of risk factors for children living in poverty.

Going to bed hungry, they are waking up sick.

Indeed, children who are homeless are sick four times more often than other children. Stressed, hungry, and tired, their young developing bodies are plagued with:

at much higher rates than their peers, according to the National Center on Family Homelessness. Ultimately, these high rates of poor physical health can only make learning harder for students living with homelessness. 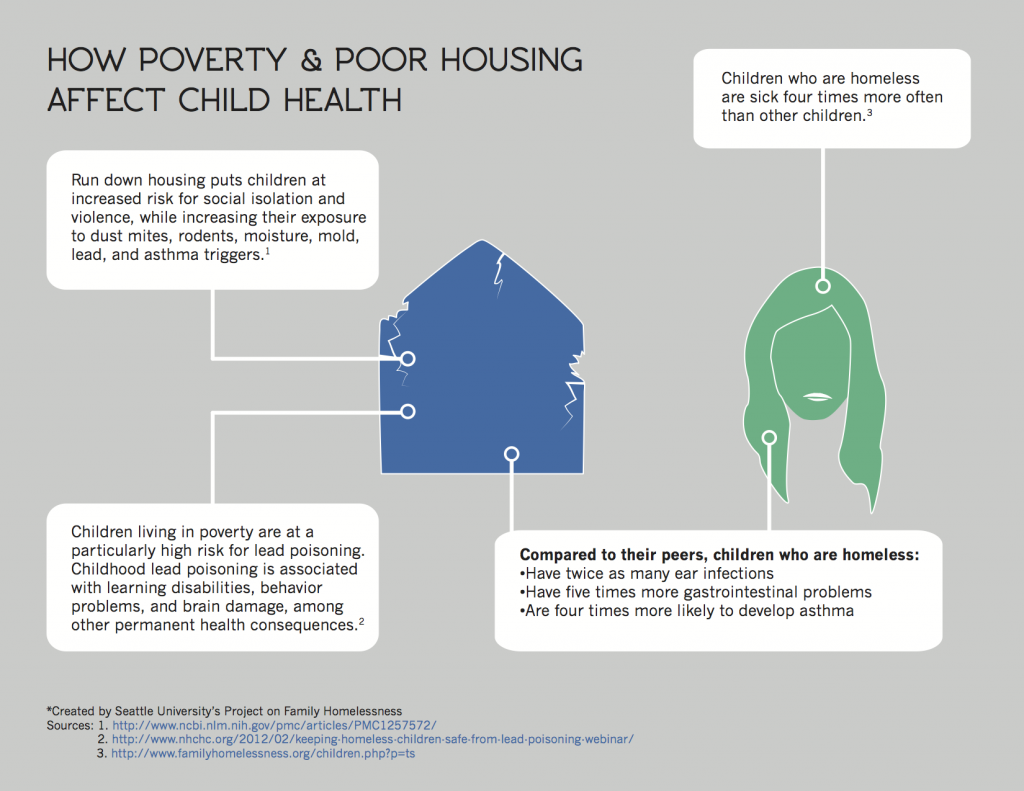 However, hunger, poor health, lack of housing (or unhealthy housing), mobility, and school changes are only some of the risk factors that children living in poverty contend with.

Like all children, their sense of safety is intimately linked to the strength and health of the adults around them.

Attentive maternal care is essential to a healthy child

There is nothing more central to a developing child’s mind and sense of security than his relationship with his primary caregiver.  Chronically neglectful or inattentive care can harm a child’s ability to develop effective self-soothing skills. Conversely, strong parenting enables children to internalize these skills, preparing them to meet life’s challenges in healthy ways.

The power of strong parenting is backed up by researchers who found that children living in an emergency shelter who received competent mothering started school with higher IQ scores and better self-control than children whose mothering was not as competent. In other words, attentive maternal care can buffer the impact of childhood stress.

So just as attentive maternal care can counteract stress, its absence, in combination with other risk factors, can create a void where stress overcomes a child’s delicate defenses.

Children are resilient. In a safe reliable relationship with a primary caregiver, there is much they can overcome. However, because of the very nature of the developing brain, and how it processes stress and trauma, most children living in chronic toxic stress will experience a detrimental change in how their brain works.

When children experience chronic stress, chaos and deprivation, the way their brain processes and responds to stress can be changed, or “dysregulated.” Basically, the child’s stress response system becomes very sensitive, and hard to turn off once activated.

This has serious consequences, such as conduct disorder, antisocial personality disorder, substance abuse and depression.

Diving beneath the skin and into the brain, we find that both the causes of homelessness (trauma, domestic violence and more), and homelessness itself, can change the brain.

This is why it is so essential for children and families experiencing homelessness and poverty to be given the resources, housing and supports they need early. Without them, children may end up living with the scars of their early experiences long after their situations have improved.

In Part Two of this series, “Homelessness, Poverty and the Brain: Mapping the Effects of Toxic Stress on Children,” we’ll talk about how the toxic chronic stress that frequently accompanies poverty and homelessness affects child development.

What you can do

Read other posts in this series